The SMG's Metaverse Seoul Master Plan (2022-2026) was established as the first comprehensive plan among local governments to start the establishment of a new technology-based administration platform called Metaverse Seoul, which quickly responds to the changing administrative environment, such as post-pandemic society, and provides all-new public services. (Oct. 2021)

The high-performance independent platform of Metaverse Seoul will be established by late 2022, and a metaverse ecosystem across all areas of administration (including economy, culture, tourism, education and complaints) is planned to be implemented. 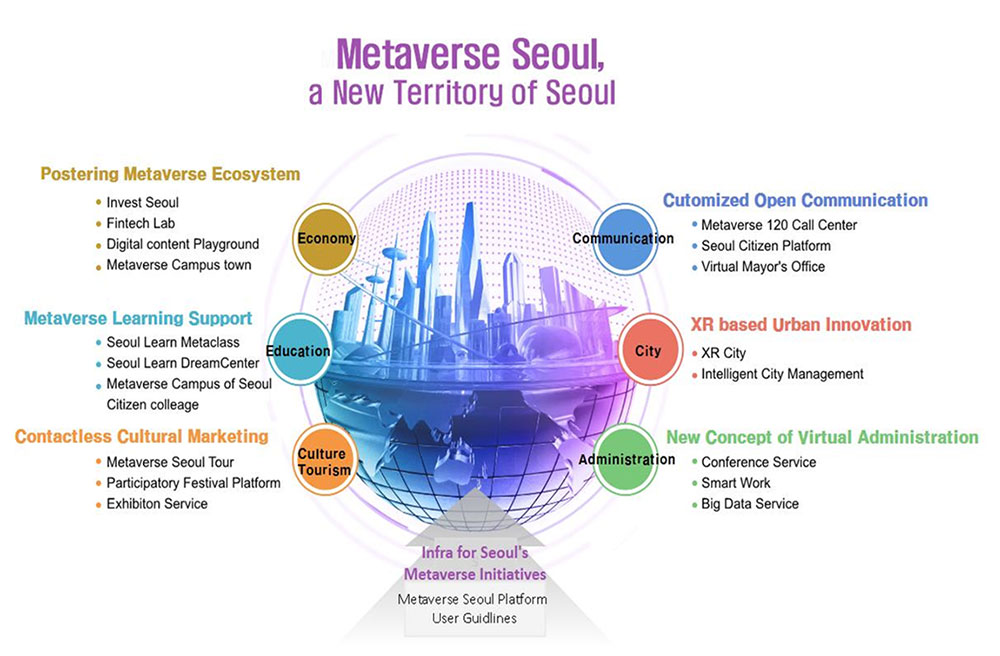 The pilot service can be experienced on mobile by searching for Virtual Seoul City Hall on Google Play for Android (coming soon on the App Store for iOS).

Opinions can be registered by clicking the 'Feedback' button from the hallway in front of the virtual Mayor's Office. Registered opinions can receive a reply from the relevant department if it receives over 50 votes following the citizen opinion procedures in 'Democracy Seoul', a citizen participatory platform operated by the city.

Watch the video below to learn how to use the metaverse app's pilot service. Check it out right now!

[Video subtitles]
Hello, everyone. My name is Seoul Kim, and today I would like to introduce the Metaverse Seoul's Virtual Seoul City Hall.
After Seoul announced the establishment of an independent metaverse platform last November.
We have finally taken the first step with a pilot service.
The first floor lobby and Mayor's Office was recreated in the metaverse for this pilot service.
Now, let's go explore Virtual Seoul City Hall!

First, we will learn how to access the metaverse and create your avatar.
① Open the Metaverse Seoul City Hall app, then log in with your Google or Facebook account.
② Create a nickname to use on the metaverse.
③ Make your own avatar to use on the metaverse.
④ Complete your avatar by dressing up your hair, shirt, pants, and shoes. Much like playing an online game, right?
⑤ Shall we enter the Metaverse Seoul City Hall together with my avatar?

Your current location is shown on the top left.
You can move around using the arrow keys on the bottom left.
You can take a selfie with the camera button on the bottom right, jump around when you are moving your avatar, and even join a chat!
We are currently on the first floor lobby of Seoul City Hall.
Let's explore!
We can see the main entrance, glass walls, and a vertical garden.

Now, let's go look at the cherry blossom tree over there!
This is a policy tree which shows Seoul's key policies.
Let me select on the keyword "Youth."
Look, a future career ladder! And details on Seoul Software Academy (SeSAC).
You can easily see Seoul's policies for citizens from this policy tree.

Let's keep on exploring the first floor lobby.
There is an information desk in front of us. Shall we take a look?
Let's look at some other areas.
We can also see the building entrance, the elevator, the situation room, and the reception desk.

But what is that cute little yellow creature flapping its wings in the lobby?
Let's go take a closer look.
Ah! It's Haechi! Haechi is the official mascot of Seoul. It looks so adorable.
Currently, there is an ongoing event called Catch Haechi! in Virtual Seoul City Hall.
Users can catch Haechi by touching it like this.
See? Haechi following your avatar around is so cute.
You can get your own Haechi pet by catching 20 Haechis which appear all across Virtual Seoul City Hall.
And if you repeat cathing 20 Haechis, it is said your Haechi pet will grow bit by bit, which is another fun thing to do.

Now, let's go to where the red carpet is.
Ah, this looks like a photo spot for visitors.
I'll pose for a photo alongside! Cheese!
Now, let's go visit the Mayor's Office.
Maybe we'll even get to see the Mayor! Let's go down the hallway.

This is the hallway which leads to the Mayor's Office. Huh, what is this room?
Ah, this room is the reception room to hold meetings and for guests to wait.
Huh! What's that red mailbox? Let me try clicking it!
Ah, this is for collecting citizens' opinions through policy proposals.
I'm going to send my own opinion, too.
The bulletin board right beside shows registered opinions and another board which only shows popular opinions.
Various opinions can be collected from citizens, and popular opinions may get an official reply from the city!

This is the Mayor's Office. Let's see what's inside. Oh, there's Mayor Oh Se-hoon!
Hello!
I'm going ot get a photo with the Mayor of Seoul. Cheese!